Emma Anglesey has activated Open House Hobart with music over the last several years, under the banner of the Festival of Architecture and Sound. In May 2022, Emma creatively produced a number of events in partnership with Junction and Open House Launceston in her hometown, and is excited to be back collaborating for the 2022 Open House Hobart program. 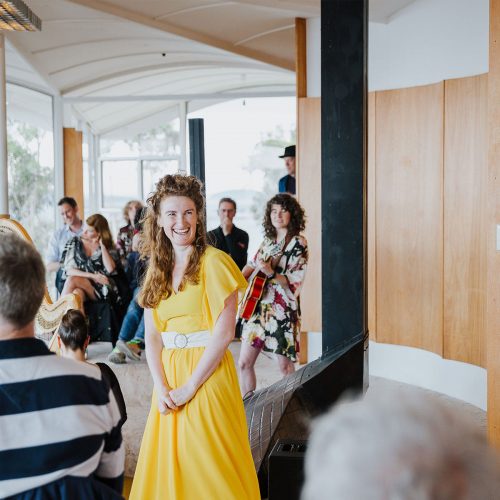 Emma is a Tasmanian singer-songwriter and one half of Runaway Belles – a country folk pop duo – with Tash Parker. Last year, the Runaway Belles’ single Flames went to #1 on the AMRAP Regional Chart and the band received the Arts Tasmania New Works for New Markets grant to record new music.

Emma’s songs have been playlisted by Double J and ABC Radio and used by Triple J to advertise Unearthed. Emma has performed at Woodford Folk Festival, A Festival Called Panama, Falls Festival, Party in the Paddock, Dark Mofo and Mona Foma, and toured with Guy Pearce, The Waifs and JUNO, along with award-winning Canadian band, The East Pointers. In 2018 she showcased at Australia’s SXSW BIGSOUND.

In May 2020, Runaway Belles released their first single The Weekend which was hailed by Music Feeds as “Tender indie-folk at its finest”. The song has surpassed 130,000 Spotify streams and their follow up b-side release Don’t Forget Monday in July 2020 has clocked just over 200,000 streams. In October 2020, Runaway Belles released another single Flames which went to Number #1 on the AMRAP Regional Chart.